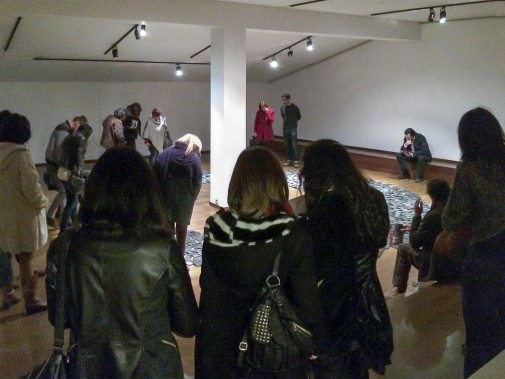 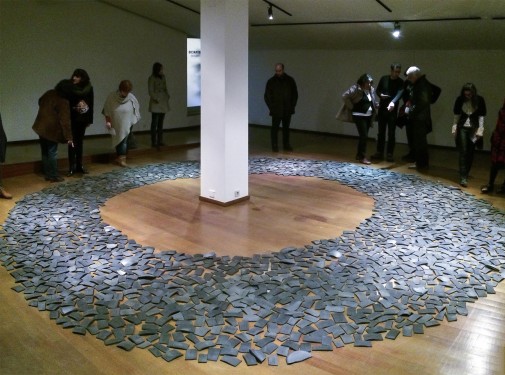 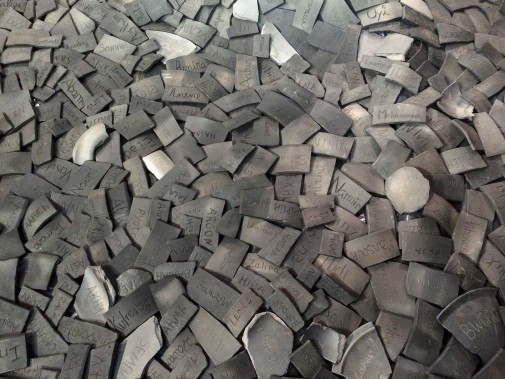 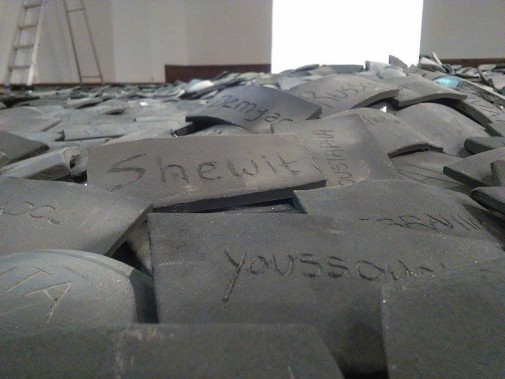 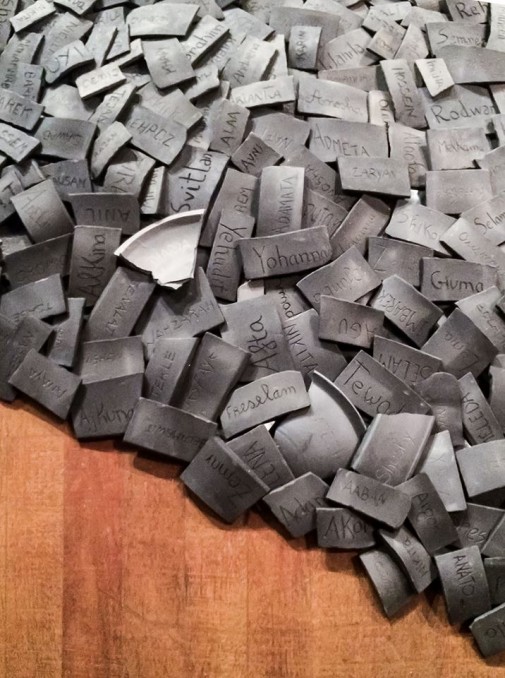 In ancient Greece, the citizens voted to ostracism saw their names inscribed on small shards of pottery, a type of portentous objects that ensured the categorical passage from a state of being to one of non-being before the community, its rules and its accredited institutions.

From those objects, and the acts of social organisation that gave rise to them, Carlos No created an artwork, and an exhibition, in the scope of an artist residency programme that took place in Tondela, Portugal. Taking advantage of the black clay of Molelos, the exhibition involved the participation of people from the municipality of Tondela through a workshop where the participants, which included the art students of the Tomás Ribeiro group of schools and the Senior University of the Tondela Rotary Club, were invited to create their own ostraca in pottery shards.

Carlos No's work has been reflecting on the concepts of border, margin, and exclusion, always according to a perspective of contextualisation in relation to contemporaneity and the socially dissimulated or violently explicit ways these concepts gain shape and body in the daily lives of different people. The concept of border implies division, a line that breaks and hinders or conditions exchanges, contacts, and movement, three forms of communication on which human nature is based. Margins only exist from an idea of centre, and it is not difficult to understand that the former are imagined as subordinate to the latter. Exclusion is the inevitable result of this conforming of the world to rigid concepts of a social ordering (and therefore also economic, political, sexual, cultural, etc.) one wants to maintain at all costs. Understanding who wants to maintain it and what mechanisms they resort to in order to achieve it is a significant part of how we can interpret the world.

Through a direct reference to Europe's historical and political past, this work intends thus to allude to a present-day situation that is very similar to the one mentioned above where, almost in the same way, we currently witness certain European political institutions vote on the number of people who should have access to the Schengen Area, and his country in particular.

There is thus no concealment of the allusion to a present-day situation related to the massive influx of migrants who every day seek to gain access to this geo-politico-economic space that is the European Union, where people who, in theory, “do not belong” to this territorial area are prevented from doing so in various ways yet for one reason alone: that of not being wanted amongst us “European citizens”, according to segregationist theories they themselves have invented.

Similarly to what took place in the ancient Greek polis, where the unwanted citizens were excluded from society and sent off into exile, it seems that, unfortunately, it is now the turn of a considerable proportion of Europe to seek to punish in the same way all the migrants who are not wanted here, and should thus be banished from this space/territory, when they are not, even before that, prevented from entering it.